Amazing Dog Rescue Group Does So Much With So Little in Wilson, NC

Home Amazing Dog Rescue Group Does So Much With So Little in Wilson, NC

Amazing Dog Rescue Group Does So Much With So Little in Wilson, NC

I recently had the pleasure of sitting down with two people in Wilson, North Carolina over lunch. These two women would probably be the first people to object to me calling them heroes, but that is what they are, like it or not.

In their work hour lives, Kim Edmondson works for a major tobacco conglomerate and Kristin Brinson does law enforcement like things for a Sheriff’s office. The reason it is important to mention those facts is because it typifies how so many people who are engage in rescuing dogs from death, kill shelters, and unfortunate fates, are people with usual lives who do extraordinary things. Kristin and Kim are the perfect examples of that.

Hero – A person who is admired or idealized for courage, outstanding achievements, or noble qualities.

The women seem to lead a tightly knit loose group of others in their community who refer to themselves as the Shelter Rescue group. Many people pitch in as they can with a little help to fund dog rescues here and there or by fostering dogs or volunteering to drive dogs to groups willing to help the dogs get adopted.

One member of this group who I met recently was Matt Smith. 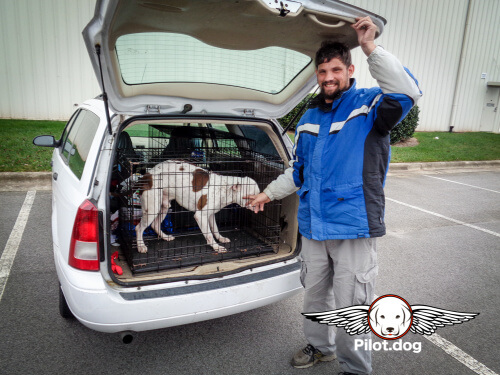 Matt Smith delivers Goblin to us at the airport for his flight.

You probably don’t know that I’m a dog rescue pilot myself in my alternate life. Pam and I had the pleasure of meeting Matt because we were scheduled to fly a dog saved from death row to Philadelphia, Pennsylvania and the good people at LaMancha Animal Rescue where in a few days he would be adopted and become a therapy dog for a wonderful autistic boy.

Because of bad weather the day of the flight it seemed risky to fly over to pickup our passenger and without hesitation or reservation Matt from the Shelter Rescue group agreed to drive him an hour or so to the airport to bring him to the plane. 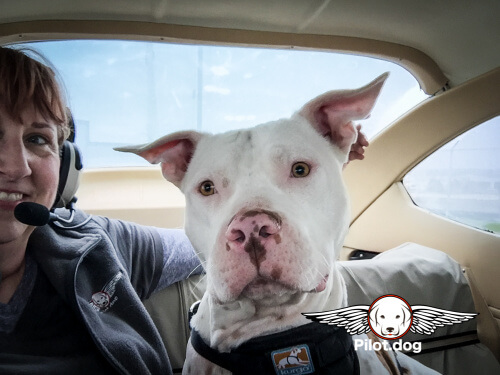 Even Matt’s story of how he wound up beating caner only to find himself disabled and then to turn that reality into becoming a volunteer transporter, is heroic in itself.

As a dog rescue pilot who meets a lot of groups all over the east coast, the actions of the Shelter Rescue folks in North Carolina is repeated silently in small and large communities, seemingly everywhere.

One universal reality is these groups all struggle to save the lives of dogs who would otherwise be killed due to shelter overcrowding. When a government run animal shelter is full, room has to be made somehow and the way it happens is to euthanize the dogs. It’s cold but it is a reality dictated by funding and space. Volunteer groups like Shelter Rescue in Wilson, North Carolina open their hearts to save as many dogs as they can from this certain death. And they do this without any source of public funding.

Kim said, “There are times that Kristin and I pay for things out of our pocket. We buy food, gas for ground transporters, board and even help with vetting costs and sponsor the dogs for hard to place dogs.”

But they are not the only ones in their community who give above and beyond. Kim added, “We have people willing to put up kennels on their property to help us temporary foster here until transport, but funding is their holdback. We are a rural community, with lots of “big hearted” people- our hearts are bigger than our wallets!”

There are so many heartwarming stories of dogs this group has rescued. But one that will melt your heart is that of little Maximus.

Maximus was found terribly wounded in a graveyard. He had been used as a bait dog for some local dog fighters to train with. He was found with a badly broken and infected leg and had over 50 bite wounds. Yes, that is as horrible as it sounds.

Injured Maximus is found starving and injured in the cemetery.

Max was in terrible shape and would have most certainly died from his injuries to his front leg or from starving to death. He was wasting away when he was found.

The volunteers in Wilson, North Carolina scooped up Maximus and got him emergency medical care. Unfortunately his front leg was so injured that it had to be amputated.

From North Carolina the call went out to for a rescue group who could help Maximus to find medical care and his new forever home once he was healed. And as amazing as the dog rescue world is, the people at Rescue Dogs Rock NY rose to the call for help and agreed to take him in. But other groups like Burlington County Animal Alliance in New Jersey often save the day with the folks in Wilson, as well.

Paul Steklenski of Flying Fur Animal Rescue was one of the pilots who helped Max fly from North Carolina for care and treatment. Paul said, “I was told he was a medical transport, and through his crate door it was difficult to see all of the damage.” After treatment and recovery Paul was still in awe of little Max. He said, “The will and determination to live in him is amazing. Barely a puppy 6 months old and he’s already been through hell, and yet all he wants to do is cuddle in your arms and kiss your cheek.” Paul remains in touch with Max and his new family to this day. 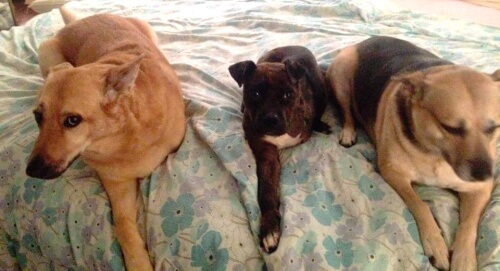 Maximus is happy with his two siblings in his forever home.

Rescued dogs from the Wilson volunteer group have not only been saved from certain death to wind up in homes in the northeast, but one sad dog from the North Carolina group wound up with Jackie Cruz, an actress in the popular television series “Orange is the New Black.” Her rescued dog, Picasso, even has her own Instagram account you can follow.

The men and women who volunteer at Shelter Rescue in Wilson, North Carolina will certainly object to me shining the spotlight on them for their extraordinary actions. But their heroic service is an excellent example of the hidden good things that happen every day, all across America, for dogs in trouble. And coming together to accomplish these missions is an impressive thing to watch. Regardless of race, religion, political affiliation, income, or sexual orientation; people in the dog rescue world just do what needs to be done.

Between the rescues caring for the dogs, more volunteers step up and drive the dogs to distant medical care or future homes. Pilots, like myself and Paul, volunteer our time and planes to fly dogs to distant locations to better lives.

You can volunteer to fly or drive rescue dogs by registering at Doobert.com.

Think about this, while people are working or maybe even complaining about not having enough pens in the office, Kim, Kristan, and an army of people are saving the lives of animals in trouble who are headed for a certain lethal injection.

Would you like to help these dog rescue heroes? You can! If you’d like to be a good samaritan to the folks at Shelter Rescue in North Carolina, they can really use your help. You can send all sorts of contributions or donations to them. They are in tremendous need of support with things like dog crates, prepaid gas cards, PetSmart gift cards, and the universally acceptable tax deductible donation by cash, check, or PayPal gift.

Please show these heroes some love so they can continue to save more innocent dogs in terrible trouble.